This summer, Sillof ran out of room in his workshop and was looking to sell some of his custom action figures. I have always been a huge fan of his work, so when I found out that I actually had a chance to own one of his action figures I jumped at the chance. I loved Sillof's various renditions of Chewbacca, and I was really happy when I was able to acquire his 1st Lt. Chuck Backer from his World War line of figures. It's the only 6" custom action figure that I own, but I totally love it. It's one of my favorite pieces. 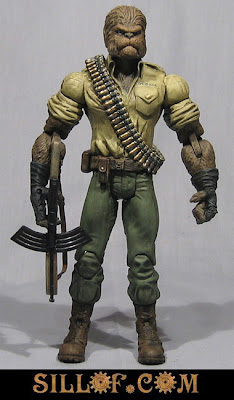 This 6" custom action figure created by Sillof can now be found in my personal collection. 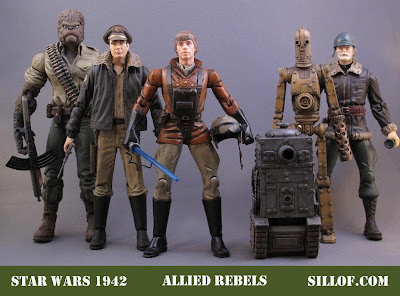 Sillof is pronouced "Si" (like Psi or Sci-fi ) and "llof" (like cough or pilaf) and no it is not his real name. He's a high school history and film teacher. He has no formal art training, other then art classes in middle school. If something turns out good, he says it is just from years of practice, or luck. He started building custom figures and dioramas when he was a kid. He opened a website in 1999. It was then called "The Wookie's Workshop" and "The Wook's Workshop". before he had his current website www.Sillof.com.

His work has been featured online on blogs, websites, and online news services, newspapers at the local, national and international levels, in books and magazines nationally and world wide. His customs have even been featured on television in local news, national news, cable, and overseas, in independent films as props, costumes, and set designs. His action figures have been publicly displayed at contests, fairs, & conventions including 3 of the 4 Star Wars Celebrations. Most recently his work has been seen in Toyfare and Star Wars Insider Magazines.

Unlike other customizers, Sillof has gotten away from faithfully creating characters and has begun to redesign these figures in various time periods or aesthetics. He creates these works out of admiration for their original designs, but rather than just recreate another person's work he enjoys putting his own spin on classic characters, as well as creating his own new characters. This is all just the creations of his spare time. He starts with a general concept or direction (samurai for example) Then he brainstorms what he wants. This is mostly done in his brain. Then he makes a list of adjectives and descriptions of the character, maybe a little back story and the physical elements he wants to include in the figure.

He then begins the actual construction. He usually works on all of them at once. So while the glue or paint is drying on one he works on another. Some parts of the figures are recycled from existing toys. They are cut off and glued together. Sometimes he sculpts over the old toy parts. Sometimes he dremels down the part using it more as an armature and sculpts over it. Often times, he will sculpt an entire new piece. Some of the figures are completely built from scratch. It really just depends on what he wants, needs, and what he has on hand in his various drawers of parts.

He sculpts using a 2 part epoxy polymer sculpting compound called Apoxie by Aves Studios. You mix 2 parts together and then in few hours it is hard a rock. It is not as easy to work with as sculpey but more then makes up for it with it's durability. Sillof says it gets easier to work with practice.

We also recommend checking out his "Toy Wars" film series where he brings his action figures and dioramas to life at this link here: