Now, this is some inside scuttlebut talk from the custom action figure community that I'm getting ready to share with all of you.  Believe it or not, most of the artists that create these custom figures talk to each other, and rather frequently at that.  We all chat about the history of the art, where to get our supplies for the cheapest, and share tips on how to achieve desired results on a project that we have tasked ourselves with.

Anyway, here's the scoop!  If you think Hasbro's figures are getting expensive, the price of custom action figures has skyrocketed, and for good reason too.  A lot of conversation has been had on this topic within the community and from what I can tell, the history of price points for custom action figures starts around the time Customs for the Kid got into the hobby and started this blog.

Our blog got started when I bought Elias a few Star Wars custom action figures created by a customizer named JACKOFTRADZE who sold custom Star Wars action figures for around $30 - $125 per figure on ebay.  Every Sunday night at 9:30pm EST, JACKOFTRADZE would post at least five new figures a week on his ebay store.  Let me tell you ALL the figures made by JACKOFTRADZE were masterfully crafted. The action figures that went for the most money were just the more highly sought after characters that people wanted in their collection.  Characters like the Tonnika sisters, Fozec, Jaina Solo, or a Jedi Master Luke Skywalker would be available in an ebay auction or if you got there early enough, you could grab a figure at a "Buy It Now" price.  Rarely did the "Buy It Now" price go over $40, but it sometimes did.  The cost of the figures were insanely cheap and they sometimes sold out in minutes!  Highly sought after figures increased in price whenever they were the center of bidding wars.  Looking back, JACKOFTRADZE was a lot like Santa Claus.  He made beautiful toys and practically gave them away for free.  His prices were so low that very few customizers could compete in the market at all. 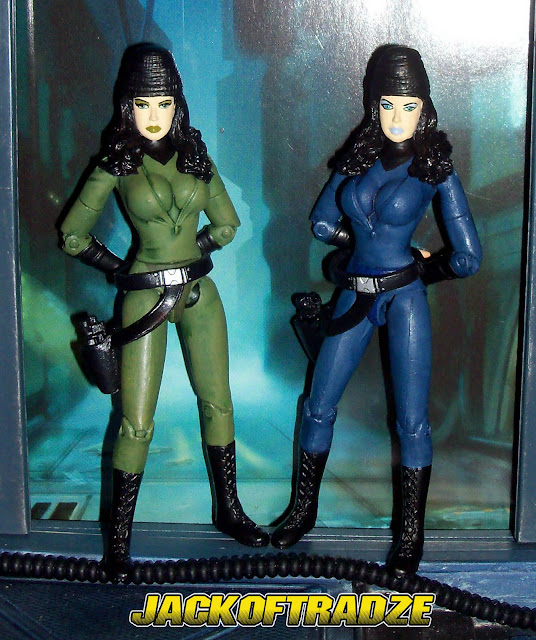 Consumers familiar with the auctions of JACKOFTRADZE had unrealistic expectations when it came to cost.  They started to approach other customizers that were looking to sell their art with severely lowballed offers whenever they tried to commission work from these artists.  As a result, most customizers refused to sell their work.   Heck, the parts used to create one of JACKOFTRADZE figures almost always outweighed the price of his entire completed figure.  He never even charged customers for his labor.  Not for assembly or for painting it.  He was a customizer that just enjoyed creating the figures, while pulling down a couple of hundred a week to support his hobby and buy more supplies.

If you were a collector of custom Star Wars action figures, this was the Golden age.  Beautiful works of art were available for so cheap.  The only negative, any customizer who wanted a return on his parts and his labor was lowballed and usually to great insult.  Customers wanted the JACKOFTRADZE price.  Consumers need to realize that JACKOFTRADZE was an exception and not the rule.  There are several customizers who create action figures professionally and it is their only job.  They support their families with the sale of their art.

Now this is by no means a criticism of JACKOFTRADZE. He has every right to sell his work at any price he feels fit.  Personally, I'd like to thank JACKOFTRADZE, because if it weren't for him, there would be no Customs for the Kid, there would be no blog, and I wouldn't have found my way into this fun and rewarding art form.  Elias loved his work and his blog.  So much so, that he wanted us to get in on the action, create our own toys, and start our own blog.  The custom action figures of JACKOFTRADZE have been an inspiration in our home and are awesome addition to our collection.  Years later they are still proudly on display in Elias' room.  We have almost 20 of his action figures. 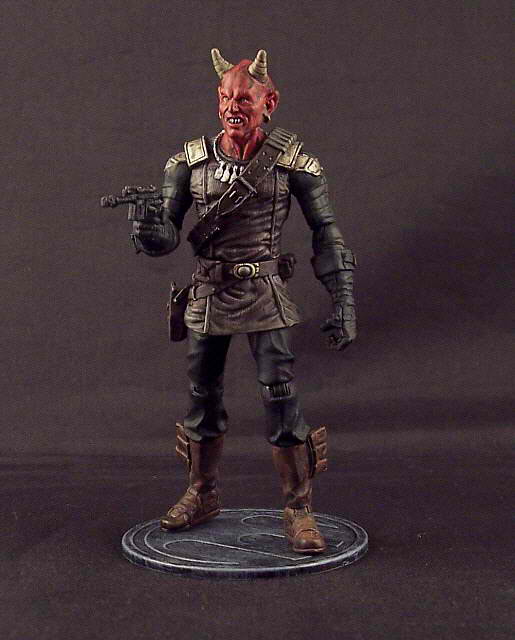 While you can still find cheap Star Wars customs on ebay, the cheaper figures aren't of the same quality as the ones that were created by JACKOFTRADZE.  If you want action figures from an artist of his skillset, be prepared to spend big money for a good quality action figure in today's market.  It's getting to the point where $250 is cheap.  And for good reason.
These aren't just action figures. They are action figure "art".

Hasbro can sell their action figures for a low cost because their figures are mass produced, and the company is able to make the money back for the time that was invested to create their prototype figure. Think of it as consumers crowdfunding the creation of a figure for a company by absorbing the costs if creating the prototype. When you commission a custom, you are absorbing 100% of the labor and production costs yourself and the more expensive Hasbro's figures get the more expensive it becomes to make a custom figure.

Now, we definitely have several figures on this blog that wouldn't be expensive. For example, there are several figures on here that I threw together in under an hour just to have a custom action figure posted on the blog for the week, but a majority of the figures on this blog were created with parts from three or more figures that all had to be purchased to create a new figure. The parts alone for a custom action figure can usually run $50+ per figure creation. Customers want maximum articulation in an action figure if they are going to make a purchase, and that requires more expensive figures ($15 - $30+ for each figure used to create the custom) to meet their demand.  I've seen customizers use over $100 in parts to kitbash  just one figure.

Consumers of action figure art really don't understand what goes into making a figure.  Hopefully, by the time they finish reading this article they will be a bit more educated and they will see the logic behind the higher price point.

It could also be helpful if I explain exactly what a consumer should expect if they decide to commission an artist to make them a custom action figure.  First, don't treat the transaction like you are walking into a store to make a purchase.  Art means you have to work around the creative schedule of an artist.  What does that mean?  Simply put, it means the artist finishes when they finish.  Believe me... you want a good product, so it isn't wise to nag, rush or bully the customizer to get your figure faster.  These figures are very labor intensive.  Action figures like the Ziro the Hutt I created took 3 ten hour sittings of sculpting, followed by painting, and I still don't feel like he's done.  That is why the cost of figures is going up.

I don't know many artists who would accept less than $100 for 30 hours of labor and on top of that not be reimbursed for the supplies.  Customizers definitely deserve a living wage and not even an entry level wage.  An entry level worker is not a skilled worker, most of the artists who create these figures are extremely skilled.  Customizers are changing their perspective on what they feel they deserve and who can blame them?

Anytime anyone contacts us asking for us to make a figure for them, we are always flattered and honored that they would want one of our figures, but when approaching any customizer for commission work be prepared to pay and pay handsomely. It can take anywhere from 5-20 hours to make a figure depending on the amount of work involved and you are asking a complete stranger to invest that on your behalf.  Just painting a figure takes almost 5 hours even before sculpting is even figured in.  Respect these artists the same way you would a plumber, mechanic, or any other professional individual you solicit services from.

The action figures on display here on the blog are all one-of-a-kind pieces and some can go for hundreds to sometimes thousands of dollars depending on what it is. That puts a lot of these figures out of most people's financial reach.   But, well, isn't that why art that is in galleries goes for so much.

I recently sent an email to JACKOFTRADZE to figure out what happened and why he quit selling.  I haven't heard back, but he is certainly missed.

Feel free to leave comments below.  We'd love to hear your thoughts on the topic. 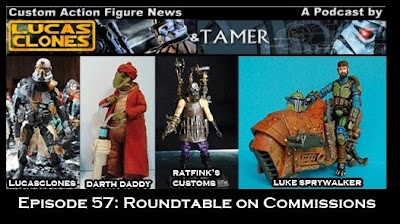