EMPIRE TOY WORKS added to "CUSTOMS I WISH I OWNED" 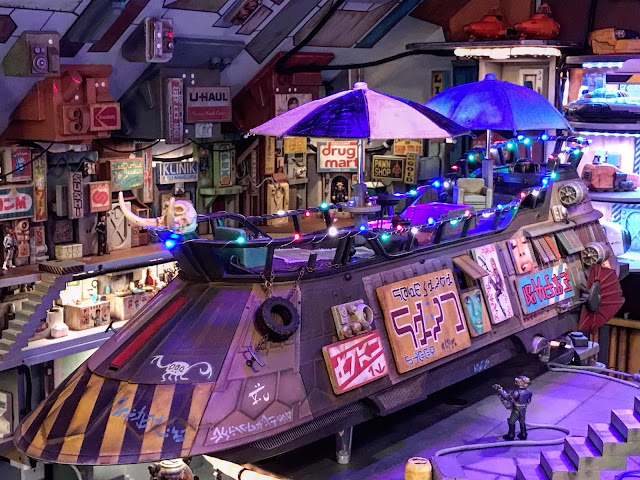 Yes, usually "Customs I Wish I Owned" features Star Wars custom action figure artists, but this time we could not help but feature a diorama artist that created the mother of all sci-fi playsets.  EMPIRE built a spaceport for his two young sons and pulled out all the stops.

About 99% of the structure is wood, mainly a mix of 5/8" plywood for the actual buildings and 3/4" for the landing platforms. Most all the piping, panels, circuit boxes, furniture, cabinets and other greeblies are wood also. EMPIRE TOY WORKS can usually do the construction of a building within an afternoon but the interior layout, painting, details and props/furniture can take a week or so.....usually longer because he works on about 6 different sections at the same time plus he didn't really draw up any plans ahead of time. Each building can be removed so the whole playset is basically modular. By the time EMPIRE TOY WORKS had built the 3rd or 4th building, he realized the whole thing was pretty much going to be a 3 dimensional jigsaw puzzle. So far, it all measures about 6 feet long, around 3 feet wide and 5 feet tall.....yeah, it takes up a little bit of space, but several kids can play on it at the same time.  Built on top of a Thomas the Train Engine track table that his children out grew, EMPIRE TOY WORKS decided to just build on top of it to keep the diorama all contained. It reminded him of an oil platform and he thought that would make a neat idea for a shanty town built atop some giant abandoned mining rig. He figured if he built the buildings completely separate of each other with out test fitting then it might give a bit more random haphazard appearance as he wanted the spaceport to look. Once the large buildings were in place then he could see what gaps he had available to add more structures. Since he started running out of space, the whole playset grew upward in levels and EMPIRE TOY WORKS started bridging platforms with stairs and catwalks. It was really more of a free build situation and just see what happens.  EMPIRE stacked the modules as high as he needed because with the structure made of plywood, he could attach the individual buildings in odd ways but the entire structure would still be strong enough to support a Millennium Falcon or any other over-sized ship or building.  EMPIRE TOY WORKS caught his 6 year old standing in the middle of the street level one day, and when he asked what his son was doing, he told him, he was Godzilla. EMPIRE TOY WORKS kinda knew then that it would probably survive at least a few years.

This spaceport started out with the idea of being basically a nexus of all sci-fi worlds. EMPIRE TOY WORKS kids play this way anyway, (EMPIRE TOY WORKS does too) mixing all their 3.75" toylines into their adventures. If every sci-fi universe were a major city then this spaceport would be a back roads truck stop where your action figures can all converge, refuel, pick up supplies, get drunk, have an alien tryst, and get into a gun fight. This also frees EMPIRE TOY WORKS from anything needing to be screen or story accurate. Basically anything goes when it comes to the design theme of the whole structure. He wanted something along the lines of Mos Eisley meets Blade Runner meets Deadwood. EMPIRE TOY WORKS thought the name "Rot Gut Station" sounded great for this.


This diorama is just packed full of cool environments. The diner you can access from the back of the bar. It's all a marketing ploy, place the only true restaurant on the station where you have to walk past the bar to get to it. However, they do serve actual waffles there. There is also a spiraling tower directly above the bar along with the gun shack. The doctors office lobby is a lot of fun. EMPIRE TOY WORKS did a search for medical wartime propaganda posters and medical lobby posters and found some great material. Sure it's skirting the line of "mature" a little bit but he figured the playset will "grow" with the kids as they get the in-jokes hidden around the spaceport. EMPIRE TOY WORKS just recently released pictures of the Council Chamber/Courthouse building. He wanted something for all the political robed figures to gather in with out needing to build an immense Galactic Senate chamber. He figured it would make a neat conference room for crime bosses or shady senators. Plus he wanted it to perform double duty as a courthouse setting. (EMPIRE TOY WORKS loves those random "on trial" episodes you see on Farscape and Star Trek etc.) He figured with the spaceport being somewhat less refined than a more "civilized" outpost, that the courtroom would probably have ads posted within it, sort of like a little league ball field.  Just below the courthouse is the jail, cargo bay and garage. EMPIRE TOY WORKS had no intention of building the entire 3 room wing off the side of the playset table, but when he finished constructing the courthouse he realized that it was WAY bigger than he thought it was going to be, much heavier too. The new section was built to support the courthouse but EMPIRE TOY WORKS really dug how it turned out, and a jail adds a bunch of adventure possibilities especially for a small city. He originally was going to do an actual cell with bars and a locking door but once locked up, it's difficult to interact with the figures that are in the jail. The cheap, easy and effective "sci-fi force field" seemed to work much better. Plus it gave him a way of attaching and hiding the lights behind the force "ring".  EMPIRE TOY WORKS's still adding more to the cargo bay but his kids realized it made a great getaway route when breaking out of jail and jumping off the loading dock onto a waiting speeder.  To the left of the jail is a garage/launch bay for a Police cruiser. A Robocop Police Jet fits the bill nicely. EMPIRE TOY WORKS will be adding a catwalk from the jail to the garage.  One of our favorite additions is a docking port for TIE fighters off the edge of the main landing platform. Basically the rear end of the TIE's old battery compartment slips right into the socket and it places the hatch at a convenient easy in easy out level for the pilot. It also frees up a good chunk of platform area for other ships. I really loved the 7-Eleven news stand and Wang's Taco's.  We were really excited when we saw he posted pictures of the inside of the Hotel too.


A lot of the detail work like grime on the walls or slight shadows where edges meet are just quick dry brushing techniques, usually taking no real time at all. The posters, place mats, signs, banners, the vending machine etc. are just grabbed from image searches, re-sized or manipulated, printed from EMPIRE TOY WORKS's home printer and then glued directly to the painted wood surfaces. He uses either spray adhesive on the back or super-glue over the paper to give it a slight sheen with a worn thru appearance. The cash registers in Mel's Diner and The Blue Waffle are from a couple of Playmobil school cafeteria sets. The cash registers in the 7-11 and the Toy Barn are wood that he just sanded in to shape. The computer with keyboard in the med center came from a dollhouse miniatures shop.  The vending machine and arcade games are actually pieces of a 2x4. He just cut the basic shape, sanded it all smooth, printed a little artwork and glued it to the wood.  He found tons of great items in dollhouse shops like miniature pots and pans, coffee cup, food, bottles etc. Oh and everything, minus the obvious action figures and vehicles, is basically glued, screwed or pegged in place.  This way the kids won't lose all the little bits and EMPIRE TOY WORKS won't have to set it up more than once. His kids do have a box of random items and props they can use and setup in the playset like fire extinguishers, tools, storage boxes, flashlights etc. He also used industrial strength double-sided mounting tape to lock down some items where it's too awkward to put a peg or screw down. The items won't break free unless it is pried loose with a blade.

This is by far the coolest action figure playset that we have ever seen and it's a more than worthy addition to our "Customs I Wish I Owned" page. 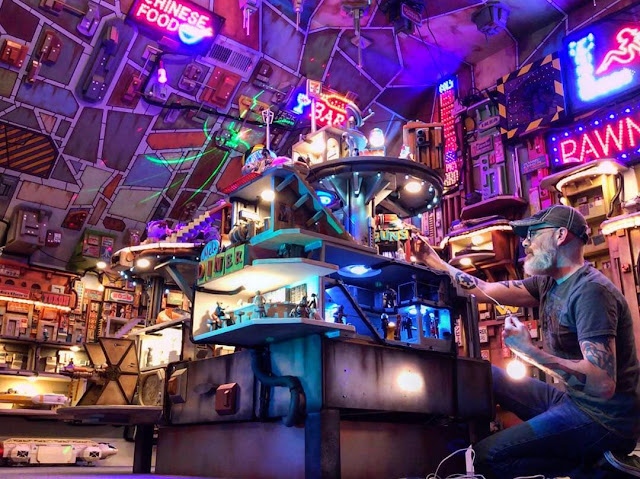 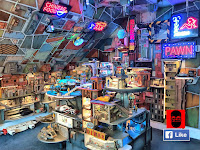 To read more about this cool playset, check out EMPIRE's diorama thread:
http://www.yakfaceforums.com/phpBB3/viewtopic.php?f=25&t=7262